Since the first high chair was patented in February 1880 not a whole lot has changed. The concept of a chair mounted on legs with a tray is basically the same. For the most part these traditional chairs work ok or at least until the child is old enough to climb, walk and run around. As the child grows most high chairs typically windup in storage, the local garage sale or worse yet, a landfill. Families then struggle for the next 3-4 years with booster seats, phone books or whatever else they can use to level their loved ones with the dinner table. The “patented” StepUp chair system will change this forever.

How it all began

In 2006 the StepUp chair inventor noticed his daughter trying to get into her booster seat alone. As usual he walked over and lifted her in. This is when the idea first came. He went to the pantry and pulled out a plastic kitchen stool and placed it right beside the chair. She knew instantly what to do. He visited his niece and she also found it easier to get up with a stool. A few days later he drew a high chair with a step attachment on a paper napkin, then approached one of the largest domestic patent firms in the US. After a bit of research the firm said there is a strong chance for a patent, so an application was made. 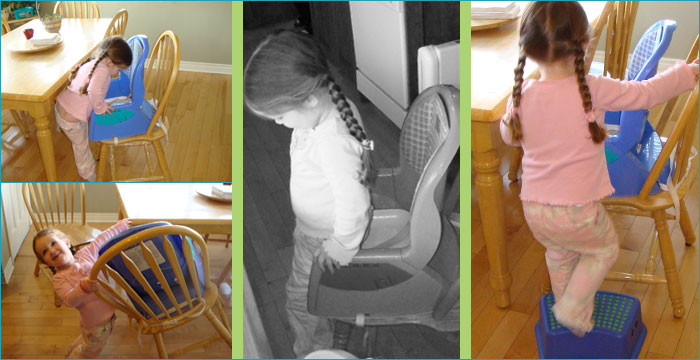 The pictures here show how the average child uses a booster seat. The typical way is the side climb. This is fairly easy but there is a chance the chair could tip. The front climb is harder and typically results in the chair being too far from the table. Getting down off the side usually involves a jump. The front dismount is easier but could involve a bumped head or chin on the way down. The StepUp chair solves all of this issues.

During the patent process additional design help was contracted to Penn State and their Plastics Technology Center (PTC). Many concepts were drawn and new ideas were starting to evolve. 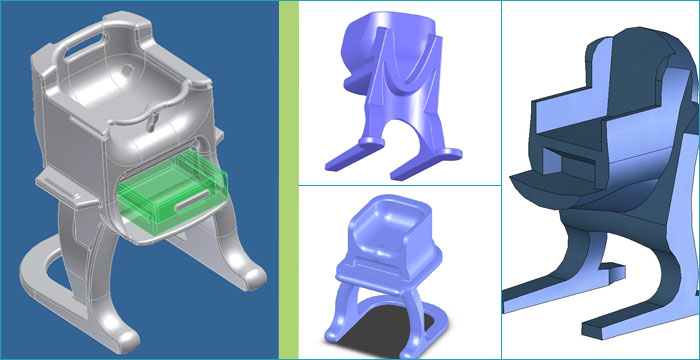 The early concept designs would now take shape in the first set of drawings.

The very first prototypes came from a 3D printer. It was truly phenomenal to see the chair come to life like this! They were only nine inches tall but it clearly demonstrated how amazingly functional the StepUp chair is. 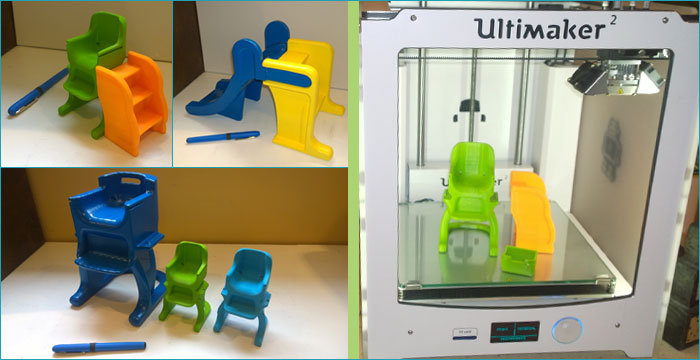 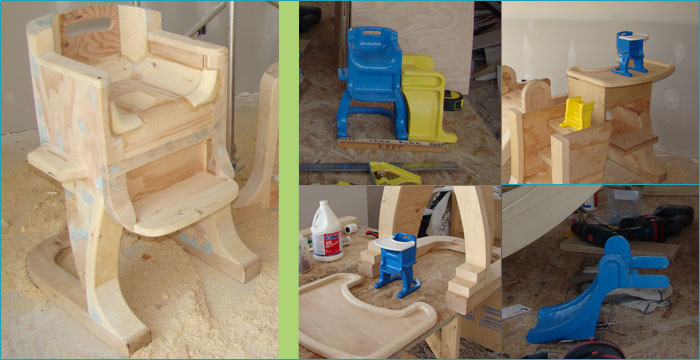 The next step was making a full size chair that kids could try. It took over 2 months to complete but a local carpenter turned the small 3D printed chair into a full size prototype. It was slightly larger but perfect for testing.

The new wooden prototype was taken to the local daycare for testing.  The chair was a hit! All the kids loved it especially the daycare operator. It could be used for so many things and was a breeze to clean up. 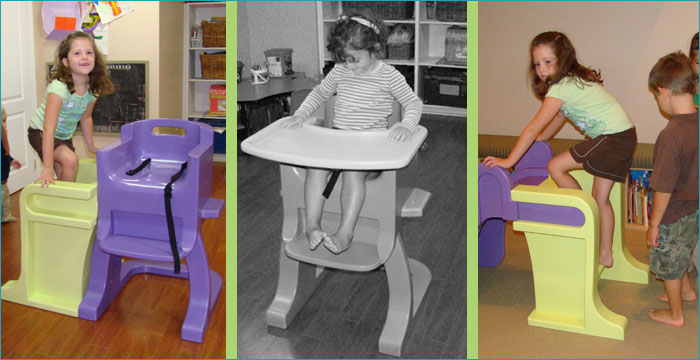 
A decade of design

Since the first StepUp chair was hand drawn in 2006 we have made several improvements. In these early days we applied for patents and slowly refined the design. After receiving the first patent in 2010 we began exposing the design to the general public. Most people were in awe of the whole StepUp concept. In 2012 we refined the design further by making a higher chair back, slightly deeper seating area and a larger sidewall on the steps. Things would dramatically change in the spring of 2015 following our aggressive pre-marketing campaign. We made national TV, ran several successful contests, advertised on parenting websites and received thousands of emails. After carefully analyzing each email, comment and survey form we soon realized there were two or three consistent messages with the current design. The full size StepUp highchair and steps created shipping challenges. The top half of the chair was not transportable. Older children would also have less use for the chair. Clearing the slate and starting completely fresh with our updated consumer information was a huge undertaking. However, we could not be more pleased with the results. Without question this revised 2016 design is our most innovative yet. Its improved functionality is also paving the way for future design concepts. We now consider StepUp as the pioneers of “metamorphic” chair design! 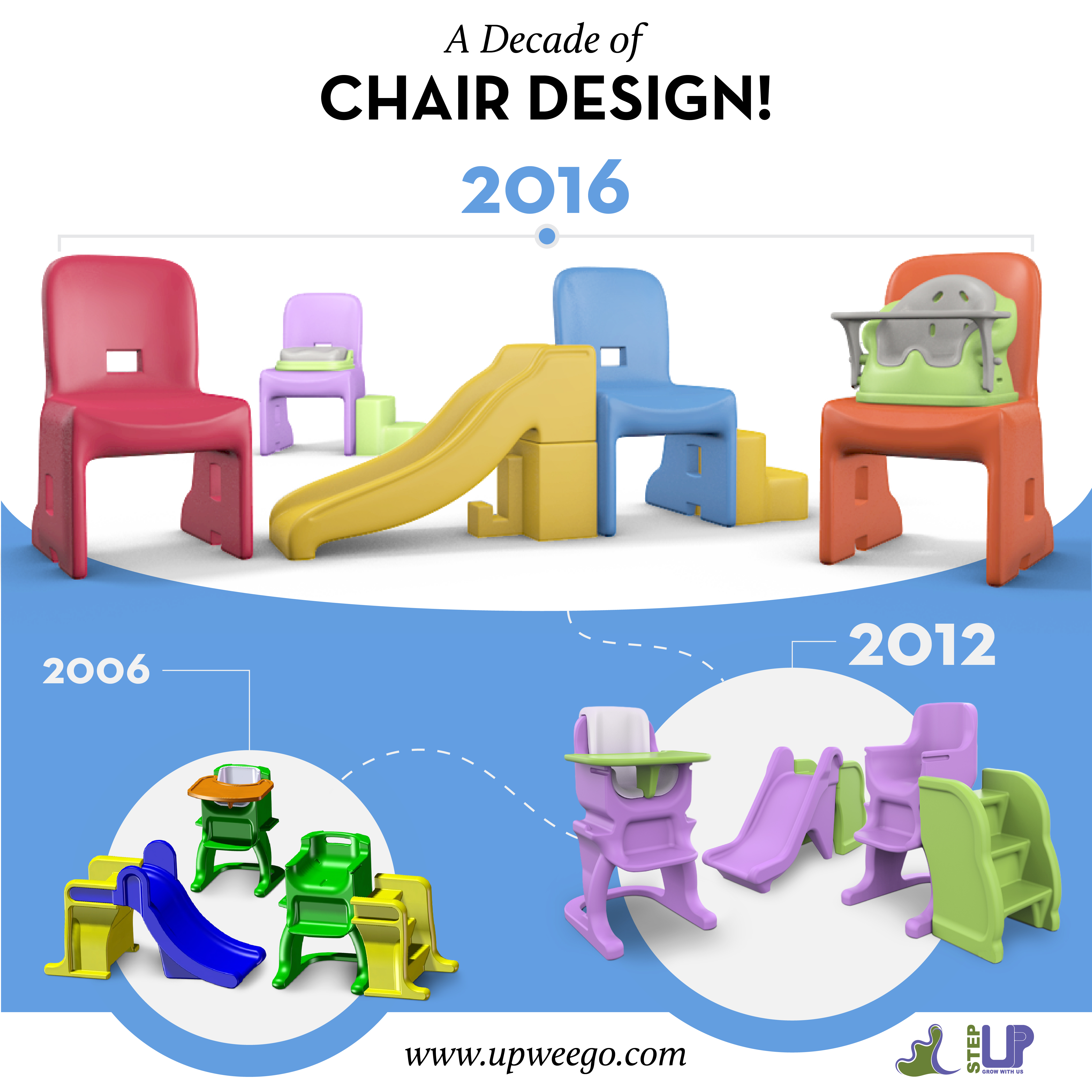